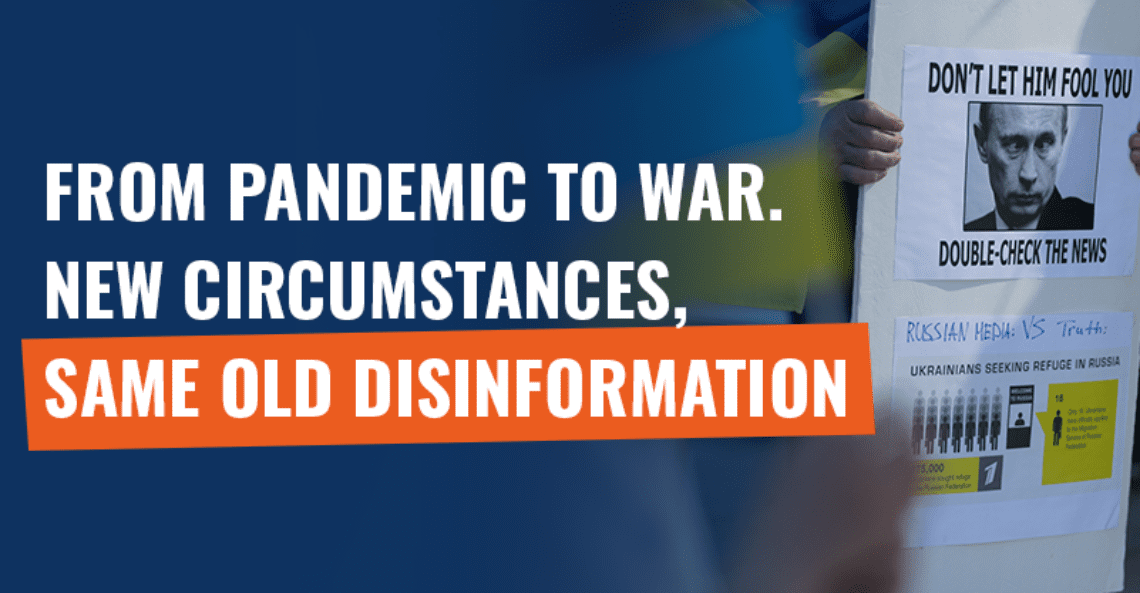 Coming across fake news while browsing the Internet is inevitable – especially since the COVID-19 pandemic outbreak in March 2020. And although the pandemic does not seem to be over yet, the public debate has shifted its focus to a new subject… War, during which good old disinformation takes a completely new form and the already known disinformation agents disguise themselves with war uniforms.

The general landscape of both pandemic- and war-related disinformation shows that it seems to be very repetitive. Basically, overnight, broadcasters of anti-vaccine content converted into supporters of the pro-Russian propaganda narrative.

Importantly, though, the patterns they kept using have not changed much. Thus, what can prevent us from falling straight into disinformation’s snares is the understanding of its repetition patterns.

Everything is staged? Disinformation Feeds on Limited Perception

The guiding principle of many conspiracy theories is: „There is only what you see.” Some conspiracists, accustomed to the simplified world of pop culture, believe that if the pandemic does not look as brutal as in the „I Am Legend” movie and people do not die en masse in the streets, it is a sign that it simply does not exist.

Not much has changed in this stance – CCTV recordings from quiet and empty streets of Kyiv or Zaporozhye during the war? According to conspiracy theorists, there is no respite in a „real war”. As long as it doesn’t resemble the „Call of Duty” series around the clock, and a hail of bullets doesn’t flood every district of the city, there’s no such thing as war. Such cognitive dissonance based on erroneous expectations was encountered by, among others, people commenting on the entry below.

Screenshot of a Facebook post suggesting that photos from the war in Ukraine were in fact taken much earlier to deceive audiences of the largest media outlets. However, the photos presented really do depict the current conflict, an information that the author of the post has not checked or tried to verify in any way.

Everything is a fake – everyone is either a dummy or an actor. In this way, disinformation tends to oversimplify and play with limited perception. It is easier to reach for the usual explanations. It is easier to expect reality to resemble a movie or a game rather than to understand that people must also somehow function during a pandemic or war… But at the same time, tragedies are happening right around the corner.

No Pandemic, No War? Conspiracy theories in disinformation’s service

If there is neither a pandemic nor a war, what is really happening in the world? Denialism is an easily accessible way to negate reality and always find an alternative answer, which most often comes down to: „this is a substitute subject” serving „the execution of evil interests”. Earlier, serving “secret agents” in order to introduce vaccines depopulating the globe; now, during war – so that the Jews could create a new state in Ukraine. There are no coincidences in the conspiracist’s world.

Disinformation distorts and twists the public debate and distracts the audience’s attention from the fundamental problem, acting on the principle of the „red herring” (false lead) propaganda technique. By accusing the media of redirecting interest, paradoxically, those themselves who misinform direct public attention to false leads. An example of such an act can be seen below. 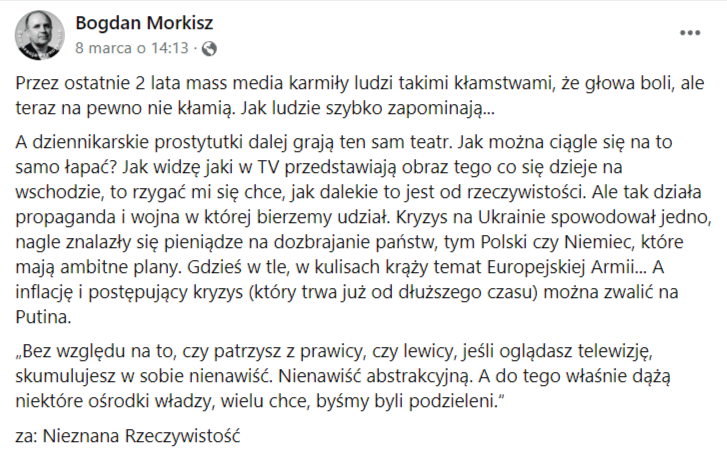 Screenshot showing a Facebook post. The author claimed that the media distract viewers from behind-the-scenes conspiracies of the authorities. Meanwhile, he himself misled his audience, diverting their attention from real, war-related problems.

Meanwhile, the global issues that our world is facing are very much real and will become more and more prominent as globalization progresses. It is easier to pretend that you are fighting „evil elites” in front of your computer screen than to show real support or promote good practices and conduct.

Anyone Can Become a Bot! Disinformation Programs Our Emotions

Anger, anxiety, terror – disinformation targets our emotions without mercy. Do children really die after vaccinations? Do refugees from Ukraine really demolish and loot Polish stores? For a disinformation agent, it does not matter if or on what scale this happens. One anecdotal evidence is enough to exaggerate the information to enormous proportions, where an exception is presented as if it were a common, every day occurrence. All that counts is triggering emotions in as many people as possible. As in the case below, where one situation was used to suggest that the refugees coming to Poland are not really Ukrainians, but in fact Middle Eastern people, exhibiting disturbing and violent behavior. 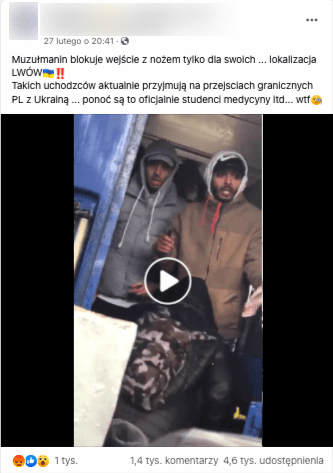 Screenshot of an anti-refugee Facebook post claiming that a Muslim was preventing „real” refugees from Ukraine from getting on the train to flee Ukraine. Based on this, it was suggested that only people from the Middle East (migrants) escaped to Poland, and not war-struck Ukrainians.

An outburst of strong emotions should put us on alert and be labeled as a major red flag, a signal that it is probably wise to pause and reconsider. Influenced by emotions, we can act hastily and become a tool in someone else’s hands, much like a programmed bot. One person won’t make a difference, but 5,000 will. Infuriated, naive internet users who spread the misinforming message could involuntarily cause serious damage.

For disinformation purposes, people are able to prove everything through pseudo fact-checking, deliberately adding false messages to the existing ones.

Vaccines are meant to be used as a deadly weapon? They will refer only to the VAERS system – where only suspected adverse events, and not scientifically proven side effects, are gathered.

Denying the destruction of civilian infrastructure during war? They will suggest that the photos of Kyiv’s destruction were taken several years ago, because they resemble buildings from another corner of the world – although it is only a false impression. For example, what you can see in the screenshot below are real photos from the current conflict – the author, however, was of a different opinion. 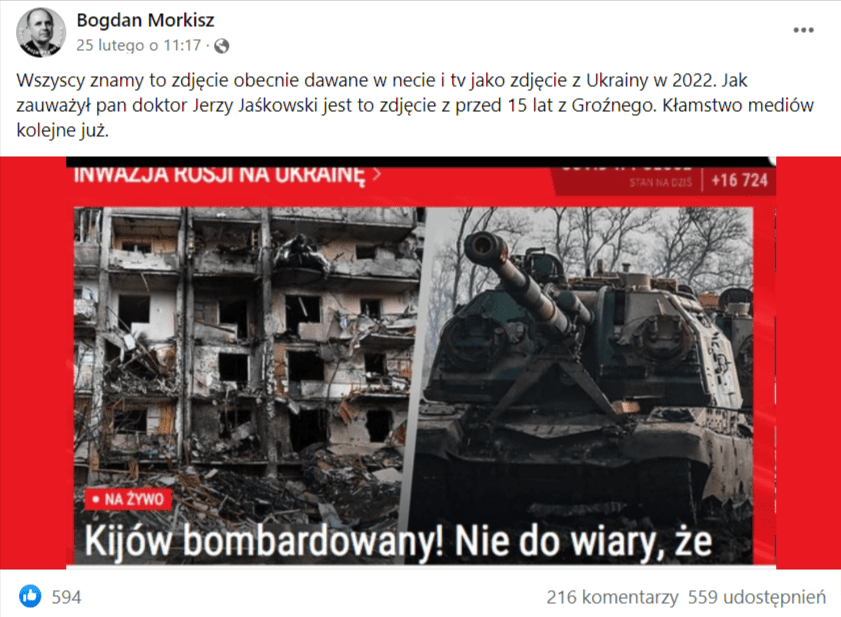 Screenshot of a Facebook post suggesting that photos from the war in Ukraine were in fact taken much earlier to deceive audiences of the largest media outlets. However, the photos presented really do depict the current conflict, an information that the author of the post has not checked or tried to verify in any way.

Pseudo fact-checking is not based on reliable sources and arguments, but on defective perception and thoughtlessly cast judgments. This is a serious issue that has become a tool used by Russian propaganda. Creators of such content invent alternative explanations to manipulate context, question basic facts, and use their platforms to promote people who theorize that Russian atrocious crimes in Ukraine are staged.

Disinformation may take many forms, but it often follows similar patterns. Any of us can break those patterns. Understanding the shapes that misinformation takes will make it easier to identify deliberately disseminated false messages, designed to divide society, evoke extreme emotions, create an impression that no one can be trusted, make it difficult to understand crises like wars and to prevent Internet users from sympathizing with their victims. 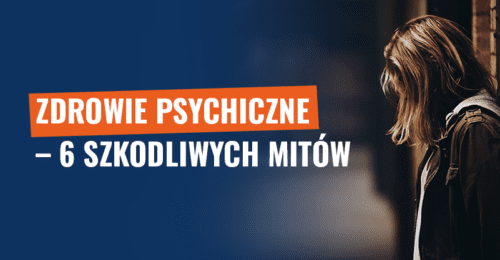 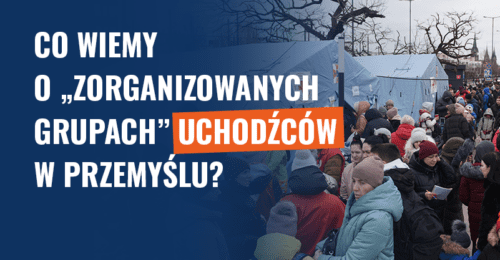 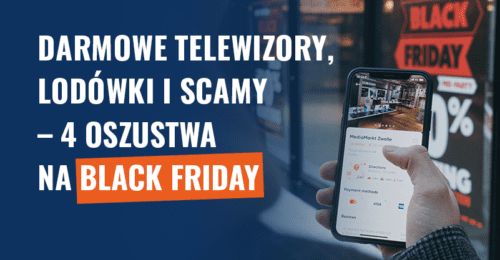