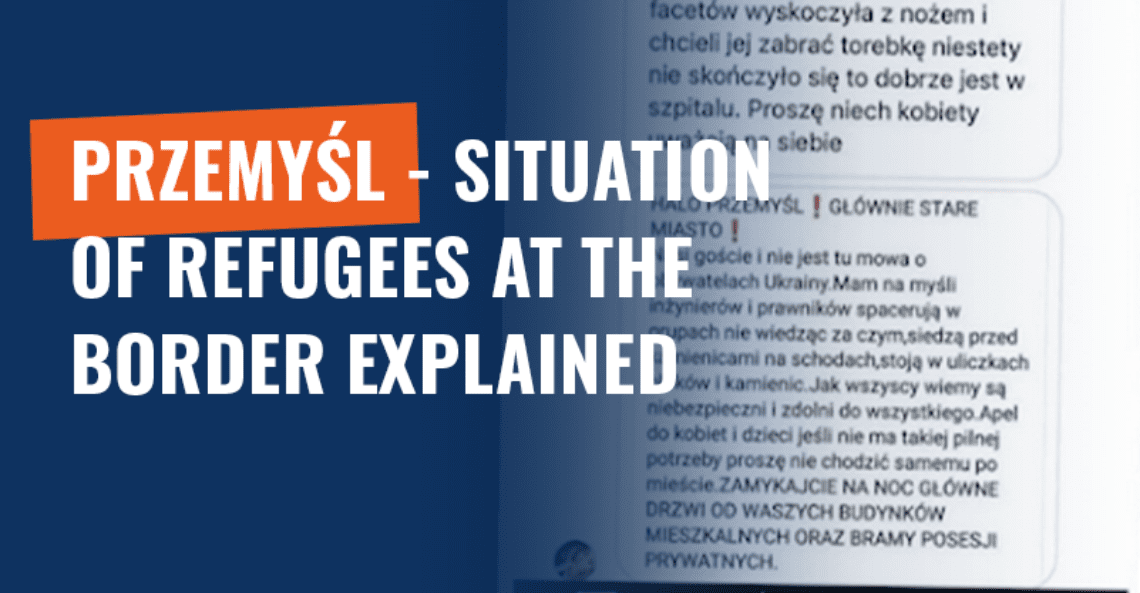 Przemyśl – situation of refugees at the border explained

We describe in detail what is currently happening at the border and in nearby Przemyśl.

There are numerous reports on social media about various incidents at the Polish border with Ukraine – the refugee demographic is supposedly dominated by young men from Africa and the Middle East, committing violence and theft and trying to cross the border without required documents. However, reports of individual cases do not prove that this is a broader phenomenon, and unnecessary panic can fuel misinformation and attacks on refugees.

Information about non-Ukrainian refugees is flooding the web

One of the most dominant messages related to the crisis on the Polish-Ukrainian border is that the Ukrainians themselves are allegedly a minority among the refugees arriving in Poland.

„Only 20 percent are mothers with children”. – writes Tysol.pl, referring to a purported paramedic from Korczowa. Video of the interview the man gave also noted numerous views on YouTube.

„50, maybe 60 percent are Hindus,” we hear in turn from a man in another video from the Polish-Ukrainian border, making rounds on social media.

These are only two examples, yet online you can stumble upon many „eyewitness” accounts that present different, often very extreme data. None of this information is reflected in official data.

We have confirmation: a great majority of the refugees are Ukrainian

We already analyzed that the information, according to which non-Ukrainians are a majority among the refugees, is false.

The press department of the Ministry of Interior informed us on 1st March that: „The dominant group of refugees in Poland are citizens of Ukraine, but among the people checked by the Border Guard are also citizens of the USA, Nigeria, India, Georgia and other countries”.

In contrast, Border Guard spokeswoman Lt Anna Michalska  on 2nd March, told us that: „Since 24/02, around 480,000 people have entered Poland from Ukraine. About 90% of them are citizens of Ukraine. The rest are citizens of the EU and Schengen countries, and other countries – from all over the world”.

The number of non-Ukrainian refugees on 2nd March was therefore about 48,000. This is a large number and if there are numerous photos and recordings showing groups of non-white people, it is easy to get the impression that Ukrainians are not the dominant group of refugees.

Moreover, as Deputy Minister of Interior and Administration Paweł Szefernaker assured: the vast majority of people who crossed the border ended up in Polish families (often their own) (time stamp 7:19).

The representative also pointed out that female citizens of Ukraine with children are directed to a different route than men from other countries (time stamp 5:17). He further said that Poland cooperates with consuls of, among other countries, Uzbekistan and India, who ensure that citizens return to their respective countries.

The Deputy Minister indicated that on 1st March alone, more than 400 students from India flew out of Poland (time stamp 4:02).

There are also many reports on the Internet, the authors of which claim that citizens of African and Middle Eastern countries coming to Poland from Ukraine do it illegally and do not have the required documents with them.

On Wednesday, 2nd March, Deputy Minister for Internal Affairs and Administration Paweł Szefernak addressed these reports. During an interview with RMF FM, he stated that Ukrainian citizens, mainly women and children, are admitted to Poland first (time stamp 1:17).

On the other hand, people from third countries are subjected to the appropriate procedures and must carry required documents. If they do not have documents with them, they are sent to closed border guard centers (time stamp 1:37).

– People from third countries who do not possess necessary documents do not have a chance of crossing the border – the deputy head of the Ministry of Internal Affairs stated.

The ministry had already informed us that the Border Guard officers apply appropriate procedures and thorough checks to certain people concerning, for example, missing documents.

Information flood about attacks in Przemyśl

In the last few days, Facebook, Twitter and other social media have been flooded with information about alleged assaults, thefts or rapes by migrants from Africa and the Middle East, who entered Poland from Ukraine. The supposed chaos caused by African migrants has also been reported by the Media Narodowe among other outlets.

A Facebook profile by the name Podkarpaccy Kibice wrote, for example, about the „cutting of a young woman with a knife” in the Zasanie in Przemyśl. There was also information spread by word of mouth that the woman had been hospitalized. 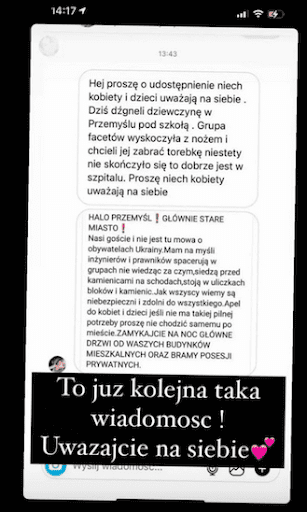 Police Sub-Inspector Marta Tabasz-Rygiel, spokeswoman for the Regional Police Headquarters in Rzeszów, informed us that the Przemyśl police department had not registered any incident of a woman attacked with a knife.

This information was also denied by Paweł Bugira, spokesman for the St. Padre Pio Provincial Hospital in Przemyśl (the closest hospital to the place of the alleged incident):

„In our hospital, there was not one case of the kind you are asking. In other words: no woman who was 'cut or stabbed’ has been admitted to our hospital in recent days”.

The same information was provided to us by the spokesman for the Regional Ambulance Station in Przemyśl at the Independent Public Health Care Institution.  The rescuers from this institution did not receive a report of a woman „cut with a knife”.

Based on this information, reports of an attack on a woman by refugees from the Middle East should be considered false.

Incidents do not prove the prevalence of the problem

Minor, isolated incidents involving refugees have indeed occurred in border towns. In Medyka, there was a knife attack on a clerk in a grocery shop.

Video of the incident circulated on social media and in major media outlets, including Super Express and TVP Info. There were also social media posts about „numerous thefts in local shops, carried out by economic migrants from the Middle East” written by Podkarpackie football fans.

Police Sub-Insp. Marta Tabasz-Rygiel informed us that – apart from the mentioned robbery in Medyka – no rise of crime has been reported in Przemyśl and the surrounding area:

„We did not receive reports of any rape, sexual assaults, there were no thefts, burglaries or misdemeanors. One incident in a shop in Medyka (a foreigner attacked a shop assistant and reached for a knife. The man quickly overpowered him and handed him over to the police. The man, a Moroccan national, was charged with robbery) cannot build a narrative that it is dangerous out here. We have not recorded even minor thefts by incoming foreigners.”

The bitten-off finger is true. This is the most serious incident that occurred at the border.

The media also reported that a Turkmen citizen bit off a rescuer’s finger. The incident was reported on Facebook by the Regional Ambulance Station in Przemyśl.

However, the post is no longer available because, as the station explained, it triggered a wave of hate speech and was „instrumentally used to create an atmosphere of danger”.

We were also able to obtain confirmation of this from the Rzeszów police station KWP. As Police Sub-Inspector Marta Tabasz-Rygiel told us:

„I confirm that on Tuesday (1/03) evening, a 44-year-old man (citizen of Turkmenistan), during medical transport from Medyka to a hospital in Przemyśl, attacked a paramedic and bit off a fragment of his finger. The man escaped from the ambulance, we know his identity. A police search is underway.”

Between Tuesday and Wednesday, there was a 20,000 percent increase in disinformation incidents!

The fact that there are isolated reports of such incidents does not mean we can speak of a widespread phenomenon. Attacks and aggression are a byproduct of the chaos of war, as well as the need to flee, and do not reflect on refugees in general.

However, since reports of violent and aggressive behavior are extremely popular in the media (especially if they concern people from other cultures), one can be under the mistaken impression that the scale of the phenomenon is much wider than it actually is.

On Wednesday, 2nd March, the Institute for Internet and Social Media Research reported more than 120,000 disinformation attempts in Polish social media regarding the war in Ukraine. Compared to the previous 24 hours, the number of such incidents increased by as much as 20,000 percent.

After Wednesday’s crisis, the number of disinformation attempts decreased

The following day was already somewhat calmer. On Thursday, the Institute reported 20,000 attempts to spread disinformation on Ukrainian issues, meaning that the number of incidents decreased by 85 percent compared to the previous day.

As the Institute points out, the disinformation content is dominated by a narrative of building a sense of internal threat within Poland.

The purpose for publishing such a large amount of false or manipulated content about refugees from Ukraine may be to cause panic and incite attacks on people who arrive in Poland.

There have already been reports in the media of „hunts” for refugees, and in Przemyśl, groups of footballs fans have “patrolled” the streets, arguing that residents are complaining about theft and attacks by refugees of non-Ukrainian origin.

The actions of football fan groups are to focus on – as they describe it themselves – „checking IDs and escorting people without documents sitting in parks, tenement houses, backyards, blocks of flats, on stairs in front of staircases to the railway station from where they would leave the city by train”.

Police Sub-Insp. Marta Tabasz-Rygiel confirms the existence of such an initiative, but warns that civic ventures of this kind do not have patrolling powers. „We have information that people from certain circles present themselves, especially in social media, as citizen patrols. I can assure you that only the police and officers of other services are authorized to carry out such tasks as patrolling,” the spokesperson told us.

The police have not reported an increase in crime so far

Police also regularly warns against panicking, which may be caused by information about alleged attacks near the border. Officers have assured that recently there haven’t been more crimes reported in the border areas than before the refugees started arriving.

As a spokeswoman for the Regional Police Commander in Rzeszów told us on 1st March: „(…) at the border, at reception points, police officers from the criminal division are also on duty. Their role is to ensure the safety of persons seeking aid in Poland and to prevent them from falling victim to crimes such as theft, fraud or human trafficking”.

The Police also posts about the fact that there are many officers at border crossings and in Przemyśl, watching over order and safety, on their social media.

Police Sub-Insp. Marta Tabasz-Rygiel told us that „Significant police forces are watching over the safety of residents of our province and people in Poland. In activities related to the situation on the border, Podkarpackie police officers are supported by approximately 800 officers from other provinces.”

The same statement was made by Deputy Minister Szefernaker. – In recent days, police numbers have been increased in two garrisons, the Lublin and Podkarpacie garrisons. 1500 officers in these two garrisons, that’s how much these garrisons have been strengthened by – he explained for RMF FM (time stamp 2:18).

He also added that – in connection with the acceleration of the process of letting people through the border from the Ukrainian side and the resulting traffic – there have been 300 more officers deployed in Przemyśl alone since the early morning hours of 2nd March. 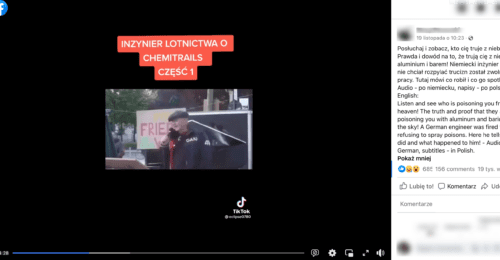 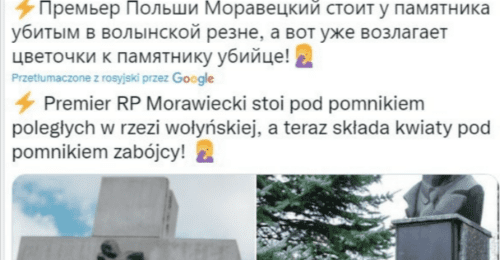