Strona główna > Analizy i raporty > Ukraine is ruled by the „Zelensky regime”? This is propaganda 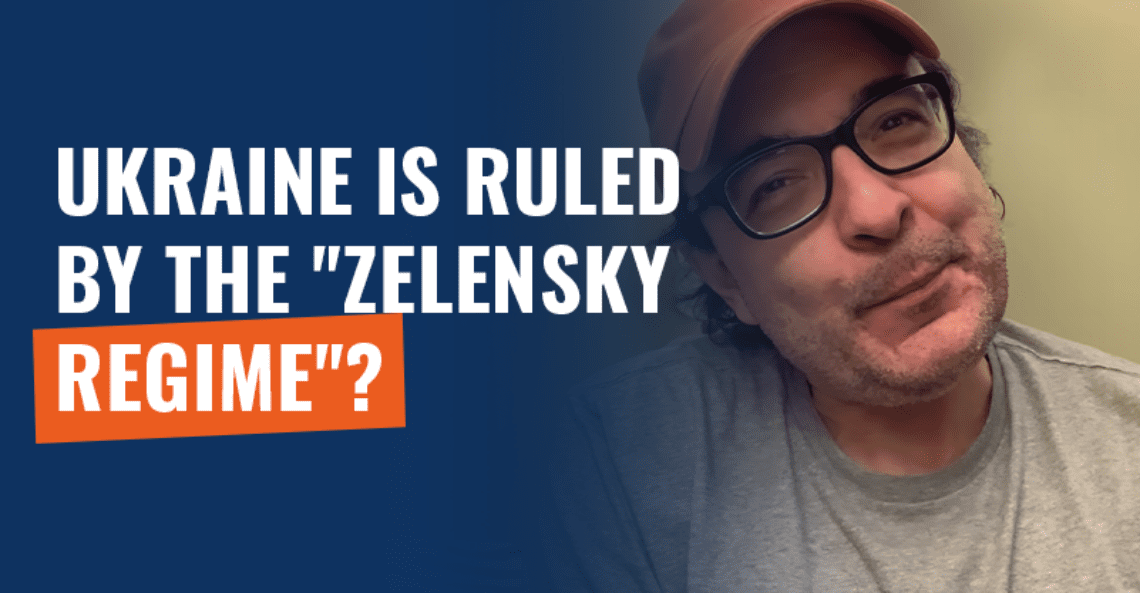 Ukraine is ruled by the „Zelensky regime”? This is propaganda

In various ways, disinformation messages attempt to explain Russian motivations for attacking Ukraine. Conspiracy theories speak of the existence of Ukrainian military laboratories and other dangerous facilities that Russia allegedly wants to destroy. Other theories also refer to an alleged mission to „denazify” the country. In a similar vein struck by Gonzalo Lira López, the current Ukrainian government is a „Zelensky regime” that would „(…) enjoy watching Ukrainians die” (time stamp 10:40). 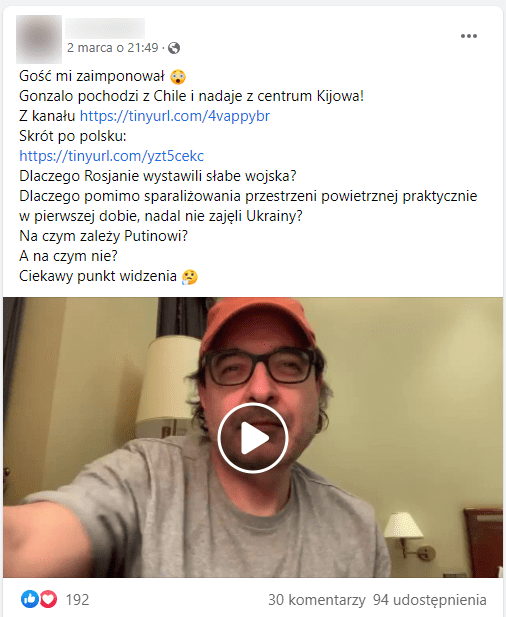 Gonzalo Lopez from Chile? Who is the man in the video?

Ukrainian fact-checking service StopFake has already analyzed the film and its author. Gonzalo Lira López presents himslef as an American writer, sometimes also as a director. His pro-Russian footage filmed in Kyiv, supposed to be an authentic account of current events in Ukraine, is hitting the web. As StopFake describes:

„(…) he films scenes that are meant to look like acts of looting, shootings between citizens, and those that are meant to depict the defeat of the fighting spirit among the population. In his view, the Ukrainians are being used by the 'Zelensky regime’ as living shields against the Russians.”

In the video, we can hear these claims that often appear in pro-Russian disinformation, including that the Russian military does not aim at civilian objects or civilians themselves. As López puts it: „The Russians only hit military targets (…) they avoid civilians. (…) And when they encounter any resistance from the Ukrainian army, any serious resistance – they stop and pull back.” (time stamp: 3:25).

Contrary to what López says, there is a myriad of evidence that attests to civilian facilities being targeted by Russian attacks. According to the UNHCR data, there were more than 900 civilian deaths and more than 1,400 wounded between February 24 and March 19. The number of casualties could be significantly higher (given data takes into account only verified casualties).

One of the most famous examples is the shelling of a hospital in Mariupol, which killed 3 people (including one child) and wounded 17. The Russians have tried to explain this attack as a military takeover of the hospital, for which there is no evidence. According to other false accounts described by StopFake, the Ukrainian army itself was said to be responsible for the bombing, as it shelled the building while retreating from the area.

Another example is a residential building in Kyiv. Russian media reported that it was hit by a missile fired by the Ukrainian army. The fact that it was a Russian missile that hit the building is proven by the direction from which the attack came.

There are more such examples. Bellingcat, an OSINT agency, has created an interactive map of Ukraine that highlights instances of attacks on Ukrainian civilians that have occurred during the ongoing war. 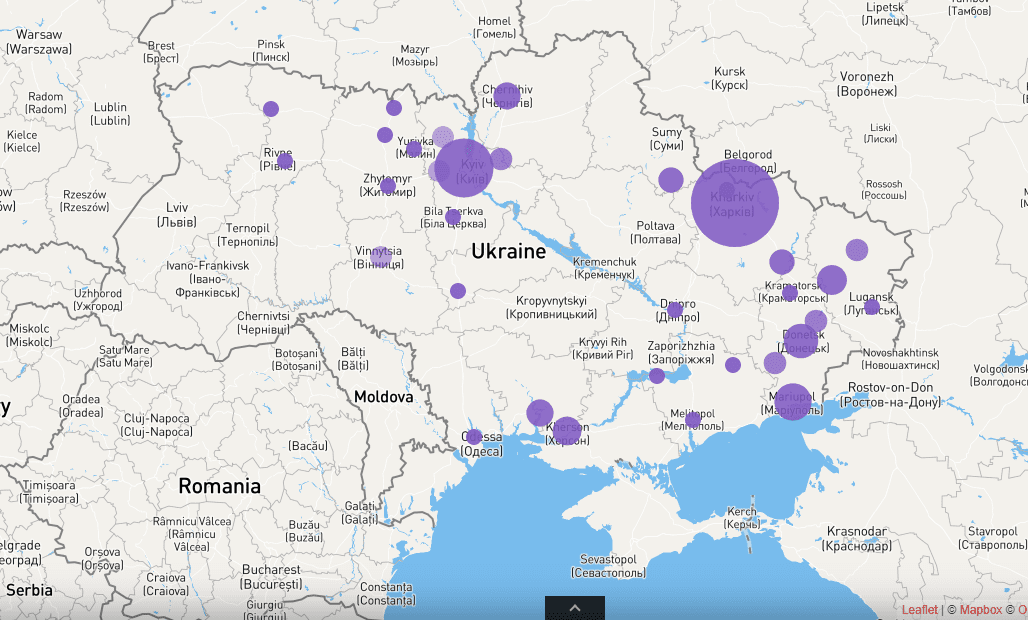 „Zelensky’s regime” responsible for casualties on the Ukrainian side? So says the Russian propaganda

The video spreads a vision of a „Zelensky regime” that distributes weapons to untrained civilians, who thus pose a threat to others, and „sets up heavy weapons in centers of civilian outposts” to create a threat to Ukrainian citizens. According to López, „it is dangerous, therefore the Russian army has the right and duty to destroy them.” (time stamp 10:40). This fits with the popular narrative that Russia’s attack is a „denazification” attempt to remove the ruling “regime”.

You’ll find numerous analyses on our website that describe the „denazification” of Ukraine narrative.  Conducting „denazification” against a country where no Nazis are in power is unauthorized. Prof. Laura Jockusch, a Holocaust scholar, argued in a commentary for npr.org that Vladimir Putin – by identifying Ukraine with Nazism – is trying to present it as a symbol of absolute evil, but he does so in complete disregard of the historical meaning of the term.

After Russia’s attack by air, land and sea, President Zelensky said that any citizen willing to defend the country would be issued weapons. The propaganda messages try to portray this as something dangerous for the civilian population. Meanwhile, the decision was prompted by the Russian Federation’s attack on Ukraine, and with arming the general population, civilians stand a chance of defending their country. Many Ukrainian citizens have a military background, and residents of some regions – faced with the risk of war – underwent weapons training.

Who is fleeing Ukraine? Mainly women and children

This „Zelensky regime” that López speaks of was supposed to have led to so many refugees fleeing Ukraine. In his own words: „The Zelensky regime is forcibly enlisting men between the ages of 18 and 60. They do not allow them to leave the country, and if they try even try to leave, they are arrested and forcibly enlisted. That is forcibly put in the army. Now, what has happened because of this? (…) every man between eighteen and sixty is running away from the cities. That’s why there are so many refugees.” (time stamp 14:00).

Indeed, men between 18 and 60 years old cannot leave the country due to the introduction of martial law. This was announced, among other state entities, by the State Border Guard Service of Ukraine on its Facebook profile.

There is no evidence that this has led to mass flight. It is not true that the reason for many refugees is that men in this particular age bracket have fled the country. According to data published by the Polish Border Guard, more than 2 million refugees, mostly women with children, have entered Poland.

It is also known that more than 320,000 Ukrainians living outside the country are returning to their homeland to fight alongside their fellow countrymen.

The video in question uses many themes popular in pro-Russian disinformation: narratives about a Ukrainian Nazi „regime” justifying the Russian attack, and presenting it as a „meticulous operation.” In doing so, it tries to legitimize Russia’s aggression on Ukraine by misrepresenting the series of events, in which it is the Ukrainian government that is dangerous to its citizens and not the Russian military.